by Reactor Staff on Wednesday September 30, 2015

A recent article by MSN made me do a double take.  According to the US Bureau of Labor Statistics (BLS), Music Directors and Composers experienced the second fastest job growth in the US over the past 10 years. In the past decade that category experienced a job growth of a stunning 154.1%, second only to “Service Unit Operators, Oil, Gas and Mining.”

The MSN article went on to state that school budget cuts may hinder future growth, noting that many “music directors and composers” are employed by elementary schools and high schools, and implied the huge growth over the decade was fueled by this area.

Except that it clearly wasn’t.

According to the National Center for Education Statistics, from 2003 to 2013 the number of elementary and secondary school teachers increased only 1%.  That is compared with the 154% increase in the number of composers and music directors.  Even the most arts-friendly school board couldn’t hire that many music teachers.  No, the job growth had to come from somewhere else.

So where are all the new composer jobs coming from? A deeper analysis of the same BLS data shows a different and far more likely source than a (sadly non-existent) giant increase in the number of school music teachers.

The MSN article, taken from a report from 24/7 wall street, made its findings by analyzing employment for different job categories in 2005 and comparing it with employment figures for 2014, a decade’s worth of growth.  And indeed, the number of Music Directors and Composers jumped significantly during that time from approximately 8,600 in 2005 to 22,000 in 2014.  That 154% increase over the decade put the category right up there with Oil Engineers, which is why it made it made the news.

But a more thorough analysis of the data shows something significant.  For that analysis, we went to the same source as MSN, the US Bureau of Labor and Statistics (bls.gov), specifically the Occupational Employment and Wage Estimates.  There, we didn’t look at just the endpoint years of 2005 and 2014, but at each individual year in that 10 year period.  What we found was stunning: 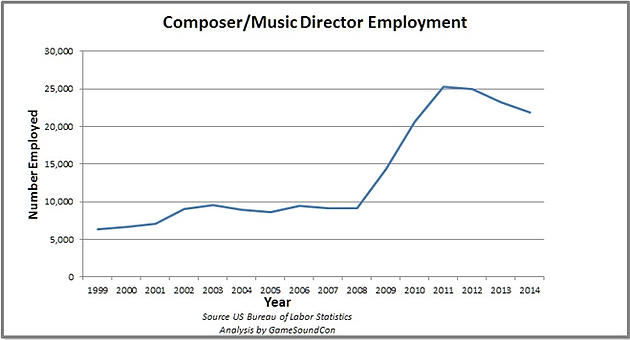 For several years, the number of composing jobs remained relatively flat (though with an interesting increase in 2001/2002), with some steady job growth from the late 1990’s up to 2008.  Starting in 2008, however something changed.  In the 3 years from 2009 to 2011, the number of composing jobs jumped by over 15,000. It’s as if someone suddenly decided “hmm, the US needs thousands of more composers!”

What happened?  What caused that sudden jump in demand (and jobs) for “Composers and Music Directors?”

You can thank Steve Jobs and Mark Zuckerberg, and perhaps even Bill Gates.

That’s because of what they did in July 2008 and May 2007 respectively.  And what did these tech titans do to add to composer employment?  They opened of Apple’s AppStore and the Facebook Application Developer Program.  Those events (and others in the game industry) changed the video game industry almost overnight.  Mark those on the graph and you see something striking: 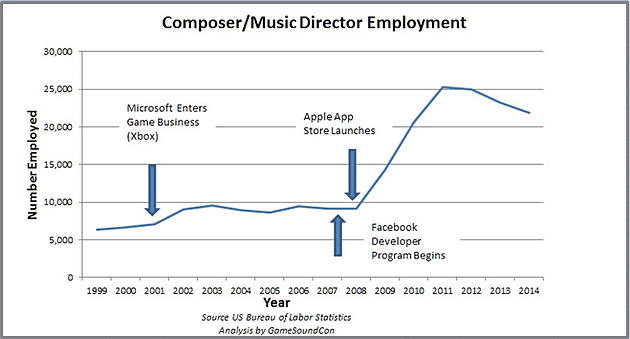 Do you remember when there was no such thing as an “app?”  It’s hard to believe they’ve only been around a few years.  Now of course, apps are everywhere with millions of apps on the app store.  And a huge percentage of apps are games.  Games need music, and who else to create music for these games than composers.  By some estimates every day over 500 new games are added to the app store.  The overwhelming percentage of those games have music, which is more often than not supplied by a composer writing specifically for that particular game or licensed.

Around that same time, Facebook gaming took off, with Zynga creating an entirely new genre of game, the social game through its mega hit, Farmville.  Hundreds of millions of new gamers started trading with each other, making farms, building cities, battling each other or trying to crush more candy than their friends.  People were hungry for games, which opened up the market for tens of thousands of new game developers to make and sell their games.  Simply put, those game developers found themselves in need of composers to write music for their games.

Ok, so there are lot of new jobs for composers.  But perhaps all those new Composer jobs are really bad— after all, composing a couple songs for a little iPhone game hardly pays as much as composing music for a blockbuster video game like Destiny.  But according to the same BLS data, the median salary for composers from 2007-2014, increased somewhat from $53,970 to $55,230.  A typical iPhone game requires much less time from the composer to complete, so that composer is now free to work on many more games even if they make less for each game individually.  In fact, a study by SoundCon showed the median salary for video game composers to be higher than the BLS data, with a median salary of $63,000, putting game music composers on the high end of the salary range for Composers and Music Directors.

Of course, it is important to remember that correlation isn’t necessarily causation.  There could be some other, unknown reason why in the late 2000’s there was such a large increase in the number of composer jobs.  But the timing of the increase, coincident with the earthquake-like change in the video game industry makes a very strong case for causation.  And it makes perfect sense.  The app store (and later Google’s equivalent), and the rise of mass platforms for casual and social games bred tens of thousands of new game developers, resulting in a large increase demand in music for video games.

Will this trend continue?  There does seem to be a recent leveling off in demand as the game industry continues to evolve.  And as with any job in the music business, composing for games can be fiercely competitive.  That said, the BLS still forecasts that because of “openings due to growth and replacement needs” more than 24,000  new Music Director or Composer jobs will be created by 2022.  And you can bet a big chunk of those will be composing music for video games.

Brian Schmidt is the founder and creator of GameSoundCon. The 2008 recipient of the Game Audio Network Guild’s Lifetime Achievement Award, Brian has been creating game music, sounds and cutting edge game sound technology since 1987. With a credit list of over 130 games and a client list including Zynga, Sony, Electronic Arts, Capcom, Sega, Microsoft, Data East, Namco, SounDelux and many others Brian has used his combined expertise and experience in music composition, sound design and his deep technical knowledge to change the landscape of the game audio industry. Brian is a frequent and in-demand speaker on the creative, technical and business aspects of game audio, having given literally hundreds of educational and inspirational talks at conferences all over the world. Events such as the Game Developers Conference, Microsoft’s Gamefest, Sega Devcon, the Audio Engineering Society Conference and esteemed institutions such as Yale University, Northwestern University, and Digipen have invited Brian to share his knowledge and insight into the industry.